The NZD/USD pair is still under pressure at the beginning of today's trading session. Yesterday, the pair witnessed a negative performance, during which the pair recorded its lowest level in two years at 0.60957.

The NZD pair's recent weakness may be related to market fears of recession and a cautious mood ahead of Wednesday's monetary policy decision from the Reserve Bank of New Zealand.In addition to the market's conviction that the US central bank will maintain its tight policy to combat stubbornly high inflation. The bets were confirmed by the minutes of the Federal Open Market Committee meeting released last Wednesday, along with the strong US employment data, which was published on Friday.

The latest US macroeconomic data indicated that the US Non-Farm Payrolls rose by 372K for the month of June, vs. the 268K expected and revised lower by 384K previously.In addition, the unemployment rate matched market expectations at a level of 3.6%. The report notes that annual wage inflation, as measured by average hourly earnings, fell to 5.1% from 5.3% in May and labor force participation declined to 62.2% from 62.3.

On the other hand, Federal Reserve Board member Rafael Bostik supported a 75 basis point rate increase at the July meeting, where he stated that the latest inflation data is not as encouraging as he would have liked, and added that the information received in the past few months indicated a need to access To the neutral position more quickly.

As Karen Jane Beer, Biden's secretary to the press, stated that the upcoming inflation data will be very high.The monthly survey of consumer expectations released by the Federal Reserve in New York on Monday showed that consumers' expectations for one-year inflation increased to 6.8% in June from 6.6% in May. Three-year inflation expectations, however, fell to 3.6% from 3.9%.

Looking at the most important events affecting the pair, the focus is on the US consumer price index for June, which is scheduled for Wednesday. Earlier that day, the Reserve Bank of New Zealand will announce its monetary policy decision as it is expected to raise interest rates by 50 basis points to tame inflation. 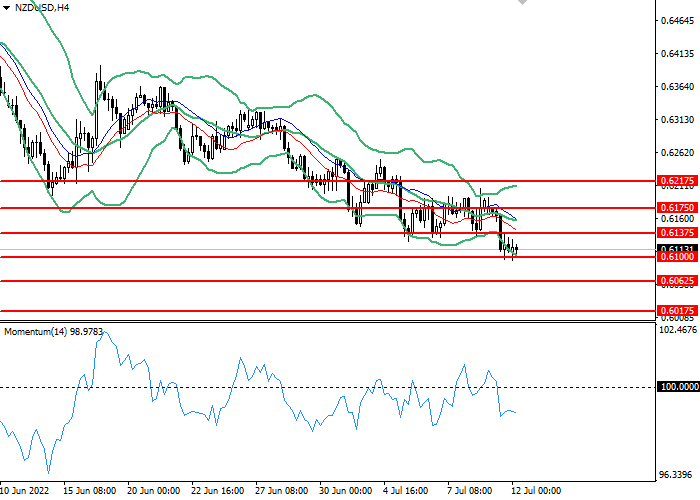 On the 4 hour chart, the instrument is consolidating at the bottom of the Bollinger Bands. The indicator is directed downwards with the widening of the price range, which indicates that the current trend is about to continue.The momentum chart is below the 100 level, which is giving buy signals. The Envelopes indicator gives clear sell signals.