AUD/USD drops to 0.69450 ahead of major macroeconomic news on the pair

The pair AUD/USD, traditionally sensitive to the appetite for risk and dependent on it in direct relation, since the beginning of the trading week is in a downtrend, as a whole market is in an anxious condition, expecting the probable occurrence of economic recession. These concerns are dictated not only by steadily rising inflation and a consistent increase in the key rate of the U.S. Federal Reserve, but also negative forecasts about the prospects for economic growth in the whole world, including the Peoples Republic of China, heavily affected by prolonged restrictions caused by the epidemic situation around the pandemic of Covid-19. Another round of geopolitical tension in the world also affects the reduction of appetite for risk: the USA confronts China about its claims in the Taiwan issue, relations between Russia and European countries are complicated due to the news about a possible further reduction of gas supplies to the West.

Negative statistics were released in the USA, showing a consecutive three-month decline in consumer confidence (95.7 vs. previous 98.4), new home sales in June (0.59 million vs. previous 0.64 million).

In Australia, experts predict the worst performance since 1990, probably in annual terms, it will reach 6.2%, which will inevitably provoke an increase in interest rates of the Reserve Bank of Australia.  The main reasons for such a surge in inflation in Australia is the energy and agricultural crisis, the global rise in prices for energy and food products.

The meeting of the Reserve Bank of Australia will be held on August 2, the main agenda is expected to raise the main interest rate to 1.35%. Experts believe that the most probable decision is to increase the rate by 50 basis points, at the same time the ceiling of its growth at the moment is forecasted at 3.35%, as the situation does not look inclined to stabilization and the cycle of tightening of the monetary policy, probably, will not end soon. The nearest step in the pairs development is for the U.S. Federal Reserve meeting, which is scheduled for July 27. Analysts expect the key rate to be raised by 75 basis points at once this time. 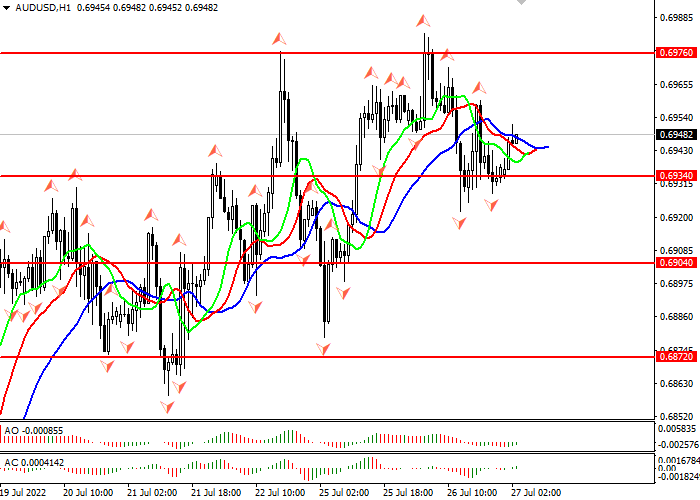 Alligator is sleeping: the moving averages are twisted, the instrument is flat. The nearest fractal below the alligators teeth (red line) is at 0.69340. Awesome Oscillator (AO) and Accelerator Oscillator (AC) are in the gray area, showing a divergence, which is not a reliable signal to open a position.