Japan's economy grew 0.5% in real terms from April to June. Consumption in Japan, which accounts for more than half of the country's GDP, grew on 1.1%, exports increased on 0.9% and imports increased on 0.7%. Builder confidence in the U.S. housing market fell harder than expected in August to its lowest level since the COVID-19 pandemic. Citizens of border areas in California started regularly traveling to Mexico for shopping products.
GDP in Japan rose for the third quarter in a row. According to data released Aug. 15 by the country's Cabinet, Japan's economy grew 0.5% in real terms from April to June. Personal consumption, on which more than half of GDP accounts, increased on 1.1%.More people started going to restaurants and traveling after covid restrictions were removed in Japan. Capital spending increased on 1.4%. It is worth noting that in the previous quarter the same figure showed a decline from 0.3%.
At the same time public investment in Japan also increased on 0.9% in real terms. In the previous quarter there was a decrease by 3.2%. Exports increased on 0.9%, and imports - on 0.7%.
Even though Japan's economy grew at an annualized rate of 2.2%, which is worse than economists' expectations for 2.7%, Minister Daishiro Yamagiwa, who is in charge of economic recovery, said that Japan's economy is gradually recovering.
Meanwhile in the U.S., builder confidence in the housing market fell in August to its lowest level since the COVID-19 pandemic. High inflation and rising borrowing costs have affected the downturn. The Wells Fargo index of the National Association of Home Builders (NAHB) in the United States, which measures the dynamics of the single-family housing market, fell for the eighth straight month and dropped to 49, which is the worst reading for the housing market since the financial crisis of 2008.
Along with that, residents of California's border areas have started regularly traveling to Mexico for shopping products. For example, gasoline in Mexico for $1.24 cheaper than in California; milk is twice cheaper. Sellers and supermarkets in Tijuana are seeing a 20-30% increase of U.S. shoppers.
Against the backdrop of declining GDP in the U.S. for the second quarter in a row, Japan's economy looks much better off. Low key interest rates and growing imports exports indicate the economy is recovering even though energy resources are expensive.

The USD/JPY tested the 38.2 Fibonacci level, but failed to consolidate near it and went back to the 50.0 Fibonacci level. Trend is descending. The RSI oscillator is in the lower half near 50. 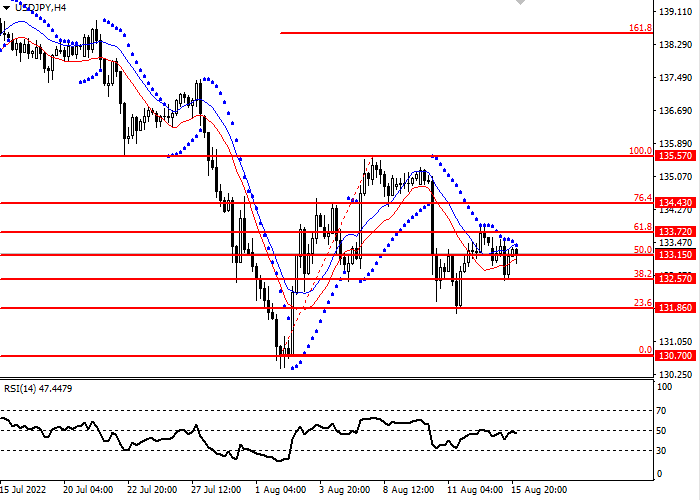